Tackling the Complex World of Political-isms 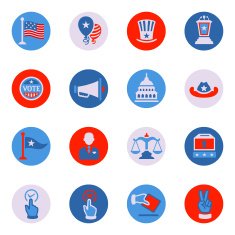 Politics is a very complex subject that includes many confusing definitions. In today’s world it seems as though there is a never-ending supply of political-isms, that is, political terminology or ideologies ending in the suffix -ism, that one must navigate in order to better understand modern American politics. Understanding these terms is important for our generation so we may continue to be active and aware of events in the world around us.

Political ideologies surprisingly do not fall on a linear scale. Putting each ideology into a line oversimplifies the situation. In reality, ideologies fall better onto a coordinate plane with four quadrants, as there can be either authoritarian or libertarian left-leaning and right-leaning ideologies. Authoritarianism is, according to the Oxford Dictionary, defined as the enforcement or advocacy of strict obedience to authority at the expense of personal freedom (1), while libertarianism is defined by Oxford Dictionary as a political philosophy that advocates only minimal state intervention in the free market and the private lives of citizens (1). Understanding where one falls on the authoritarian-libertarian scale is just as important as where one falls on the left-right scale.

It is also important to know the proper names and definitions of popular political buzzwords. Sometimes, their meanings may seem confusing, so these are the most digestible definitions along with a brief explanation. Reminder that these are just definitions and not an endorsement of one way of thinking over the other.

The best starting point would be with the methodologies of governing, as defined by the Oxford Dictionary. A monarchy is the support of putting the power in the hands of a single monarch (1). An oligarchy is when a small group of people have control of a country, typically determined by wealth status (1). A democracy is a system of government by the whole population or all the eligible members of a state, typically through elected representatives (1). A republic is a state in which supreme power is held by the people and their elected representatives, and which has an elected or nominated president rather than a monarch, which is what the United States is (1).

An incredibly important distinction to be made is that between liberalism and leftism. To understand these terms, capitalism and socialism must be defined first. Capitalism is an economic and political system in which a country’s trade and industry are controlled by private owners for profit, and socialism is a political and economic theory of social organization which advocates that the means of production, distribution, and exchange should be owned or regulated by the community as a whole, as in the working class (1).

Liberalism and leftism are two different things and must be regarded as such. Liberalism has two definitions, one of which being a broad political ideology or worldview founded on the ideas of liberty and equality, and in a more modern sense, the belief that capitalism can be reformed (1,2). Arguments over the years have brought up whether or not capitalism helps or hurts the working class, thus the divide between liberalism and leftism. Leftism has similar social aspects of liberalism, but includes the belief that capitalism cannot be reformed and must be used in conjunction with or replaced by a more socialized approach that gives more power to the working class (2). This does not always advocate for pure socialism, it depends on the leftist you are speaking with. Typically it refers to a mix of capitalization and socialization. On the left-right axis of the coordinate plane, liberalism would be moderate-left and leftism would be left-center.

Familiar right-leaning ideologies are a bit easier to discern from one another. Overall, right-leaning ideologies each encompass their own unique amount of conservatism, that is, the favoring of free enterprise, private ownership, and socially traditional ideas (1). The most well known of the moderate-right stances is classical liberalism (ironic name right?), an ideology created by philosopher John Locke that advocates for maintaining civil liberties and equal protection under the law but also supporting a free market (3). This ideology was widely popular during its conception in the Revolutionary War-era and is still widely popular today.

Neoliberalism is the center-right ideology popularized by Prime Minister Margaret Thatcher and President Ronald Reagan. In short, neoliberalism is a policy model that encompasses both politics and economics and seeks to transfer the control of economic factors from the public sector to the private sector. It also focuses on creating policies to enhance the workings of free market capitalism and calls for limits on government spending, government regulation, and public ownership (7).

The final two isms to discuss are communism and fascism, which are more similar than one might think. Communism is the far-left political theory advocating class war and leading to a society in which all property is publicly owned and each person works and is paid according to their abilities and needs (1). Fascism is a far-right political philosophy, movement, or regime that puts nation and often race above the individual and that stands for a centralized autocratic government headed by a dictator, severe economic and social control, and forcible suppression of opposition (6). Communism’s definition may look tamer on paper, but both communism and fascism advocate for a similar end goal, being the highest level of control of society by some ruling entity. That could apply to anything, common examples would be media censorship by China and Hitler’s genocide of European Jews. Communism and fascism’s similarities occur due to the fact that even though one is left and one is right, both are rooted in authoritarianism.

The world of politics can feel ever-changing and overwhelming for young Americans, but it does not have to be this way. These are certainly not all of the ideologies and terminology that exist, but hopefully these introductory definitions, comparisons, and explanations were helpful in easing that overwhelming feeling of, “where to begin?”